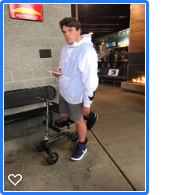 I think I broke my foot… is not a call you want to be getting on the night before you head out on your trip to Alaska.

We have been planning a trip to sail to Alaska for about a year now aboard the Ruby Princess. It sails out of Seattle, Washington on 7 a night cruise taking us to:

So here is what happened to start out the trip

First day started out at 11:30 AM on Thursday night when I first got a call from my wife stating that she thinks that our son broke his foot. Thought she was kidding, she wasn’t as he called me up wanting me to find his big Nike flip-flops for him.

Katie P. came to the door to get the shoes, I walked out to the car, and Victoria B. And Bradley N. were in the car they were taking him to Victoria’s house as her mom was a nurse. She looked at the foot and she wan’t sure as it was swollen.  It was his all night party for his high school graduation which happen earlier Thursday, May 24, 2018.

Took him to the doctor and yep he broke the same bones in his right foot as he did in his left foot. The doctor who operated on him before came in and looked at him and said this isn’t as bad as the other one Ryker. First of all, this is a clean break and we can get you into surgery quick. Unlike last time where you continued to play football on it for three months and caused a lot of damage to the tendons.

So yes, he is in a boot, on crutches, yes we have a pair, and a scooter, we just bought one as this is the third time in the last year we have had to rent one. Despite that everyone knew that we were leaving on May 25, no one but ME had anything packed. I had to pack Ryker, trying to find out what he wanted to wear, to clam him down, talk him out of Suicide (he is a member of hope squad as well) because his perfect summer is over. (More of that later)

Got the following done:

I sent the family ahead and I went to check the two bags in. Thought it would be easier to do that with my sons broken foot. I got thru security before they did. I got in the scanner and they told me to leave. I have an ankle brace on my broken ankle still and so I walked thru a different scanner. Since my son couldn’t stand still with his broken foot they had to do a pat down. I mean a very, very evasive public pat down. They went over every inch of his body while he stood there trying to balance with no crutches or scooter and without putting weight on his broken foot. I felt bad for him. This just made him feel worse than he already did.

Got on the plane with 20 min to spare and my wife made the comment see we still had 20 minutes. As I am sweating and my heart is pounding, thinking I am going to die of a heart attack and we still haven’t left the airport to fly to Seattle.

We got off the light rail and had to walk back to the Comfort Inn and suites about a 10 min walk as the shuttle was out at the airport and wasn’t sure when they would be back. I didn’t mind that. I got more steps in for the day.

So my son had his summer all mapped out, he was going to do the following:

But that is all gone due to his foot being broken. However, he did

Over the course of the game, my son realized that he has to make the best of the situation and not dwell on the fact that he broke his foot. Better now than during his Lake Powell trip or later on in the summer.